The Tile Adventure starter project provides a working example of using the Tiled plugin to create a multi-level top-down game.

Much of the game’s data is defined in the tiled levels that are added to the GameSceen. The Tiled Plugin must be installed to open this project. To install this plugin, visit the Tiled Plugin page on Glue Vault.

The .tmx extension is the native file format for the Tiled program. Tiled can be downloaded on the Tiled website.

Once Tiled is installed, levels can be edited by double-clicking on a .tmx file in Glue. The levels in Tiled look similar to levels in the game, except that levels also include a few extra objects in the Objects layer to provide navigation logic. Editing levels in Tiled is as easy as selecting a tile and painting it on the level. Before editing, keep in mind that tiles are not just visual but are also used in the game’s logic (collision, NPCs that talk, navigating to other levels). To support this functionality, levels in Tile Adventure use a number of conventions which should be followed.

Note that there’s nothing in the Tiled plugin or in our code which require these layers – the levels use this standard to stay organized. For example, placing a tree tile on the GroundDecoration layer will result in collision – the tiles define behavior, not the layers.

The GroundDecoration layer contains tiles which are not functional (no collision, no entities created), but which are used purely for decoration. These include grass, flowers, and animated water tiles.

Changes will automatically appear in game (no code changes required). Some tiles in the tileset are collidable. These tiles use the standard HasCollision property. Tiles with HasCollision can be painted on any layer and the game will create collisions. The game uses the convention of placing collidable tiles in the Ground and Obstacles layers.

Collisions can be seen when running the game by setting the ShowShapes variable in the DebuggingVariables entity. Running the game with ShowShapes checked will display collisions. Entity instances can be placed in a map through tiled. For example, Level1.tmx contains an instance of the Character entity – the girl in the house on the right side of the map.

This entity is placed on the Objects layer, which is an object layer. Objects in Tiled allow the creation of entities with custom properties. Properties added to objects which have the EntityToCreate property will be assigned to the resulting instance.

We can see the properties on the girl Character instance: Although the object in Tiled is the Girl image, the appearance of the object does not matter – only its properties.

The EntityToCreate tells the game logic that this object (which by default would be a simple tile) should be replaced with an entity instance. The following must be set for entities to be created in .tmx files:

Character instances can set their animation in the .tmx file. The character object in Level1 sets its Animation property to GirlAnimations. Animations shows that properties on instances can be assigned through tiles, as long as the variable names match up. Tiled properties will be set on an entity if either the entity has a matching variable defined in Glue or if the custom code for the entity defines a matching property. In the case of the Character entity, the Animation property is defined in custom code.

For information on creating and editing animations, see the Animation Editor page.

The dialog property is a key in the GameText.csv. The CSV file defines all of the game’s dialog. The first column is the name of a line of dialog (ID), the second column is the text that the ID represents (Text). Although the game could put the dialog directly on the tile in Tiled, using a separate CSV provides a number of benefits:

Once text has been changed, it will show up in game. The example above shows how to modify existing text entries, but new entries can be added to the CSV, then referenced on any Character instance.

This setup requires a little bit of work up-front, but is easier to maintain as additional levels are created. Note that adding multiple TMX files to a single screen is one for creating a game with multiple maps. Another common approach is to create one Glue screen per TMX file, as explained in this blog post.

The approach used here is useful if you expect your game to have a large number of maps. For example, an RPG such as Final Fantasy II (IV in Japan) may include hundreds of levels: 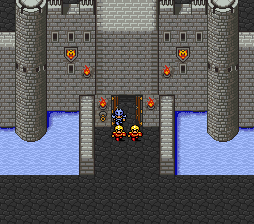 Typically a game will only display one map (TMX) at a time. By default TMX files will be automatically loaded, so we need to suppress this by setting the LoadedOnlyWhenReferenced value true. The LoadedOnlyWhenReferenced property indicates that the TMX file will not be loaded automatically, but must instead be referenced by the game’s custom code before it is loaded. This means that the GameScreen can contain any number of .tmx levels, but only files referenced in code will be loaded. Even a larger game with dozens of TMX files would only load one at a time (assuming all have their LoadedOnlyWhenReferenced set to true).

For information about how the TMX files are referenced and used in code, see the Loading Levels in Code section below.

The MapNavigationTrigger and StartPoint entities are used to perform navigation between different levels in Tile Adventure.

The MapNavigationTrigger is used to mark a tile which will navigate the user to another map. The StartPoint defines where on the map to appear. The StartPoint is important so that the player begins near the entrance of a map rather than at a random point in the map.

Level1.tmx has a single MapNavigationTrigger entity, which is associated with the object tile that looks like a white door. The properties on the tile provide the following information:

The entities use for navigation require custom code to function. GameScreen has two static fields which are used to load the level and place the character in the proper location.

The levelToLoad  field is used in LoadLevel , which in turn calls InitializeLevel  (which is discussed below).

The startPointName  field is used to position the character in the InitializeCharacter  method.

Tile Adventure uses the InitializeMethod which is generated automatically in any screen containing a .tmx. This method uses standard conventions to create a level using a .tmx file. The following functionality is provided by the InitializeLevel function:

This method simplifies creating levels from Tiled, but limits projects to a single shape collection. More complicated games may need multiple types of collision, such as one ShapeCollection for solid collision, one for collision which slows the player down.

As mentioned earlier, each TMX file is marked with LoadedOnlyWhenReferenced which means it won’t be loaded until it is referenced in code. The code references (and loads) files in a funcion called LoadLevel . This function takes a single parameter, which is the name of the level. It then calls InitializeLevel  which access the Glue file using the GetFile method.

Keep in mind that InitializeLevel  is simple to use, but does not offer much flexibility. More advanced games may need to create their own level loading code. Feel free to copy the generated code into your custom code as a starting point if you need to expand this method.