At this point we have a ship which is visible on Screen, but it doesn’t do anything. This tutorial will add behavior to our MainShip Entity so that it can move, turn, and shoot.

The MainShip movement will be to continually move forward at a constant speed, and to give the user the ability to turn left and right.

Before we begin writing any code we’ll create two variables in our MainShip: MovementSpeed and TurningSpeed. To do this:

Next let’s give the variables some default values:

To apply movement we will need to write some C# code. To do this:

Add the following line of code in CustomActivity:

Next add the MovementActivity to your class (outside of any functions). The code should look like this:

If you now run the game you will see the ship move upward, then eventually move off-screen.

The RotationMatrix property contains information about how an Entity, Sprite, or any other PositionedObject is rotated. One of the pieces of information that this property contains is an Up value. The Up value tells you which way is up for the object. This value is in “object space” meaning that if the object rotates, then this value will rotate along with the object. This is especially convenient for this tutorial because this game will have the ships always moving forward. This means that the code above will work regardless of which way the MainShip is rotated – something which we’ll see in the coming sections.

The next step is to assign a GamePad so that this Entity can turn. This approach will be very similar to the approach taken in BeefBall, so I will list the steps without explaining what they do. If you need a refresher, see the Beefball Controlling an Entity tutorial.

To add controls to your MainShip:

Note that all of the code we have written uses coefficients (MovementSpeed and TurningSpeed) defined in Glue. This means that you can modify these values in the MainShip Entity at any time if you want to tune how the game feels.

No Xbox360 controller available?That’s okay, you can remap input so that you can use a keyboard as an Xbox360GamePad. For information on how to do this, see the ButtonMap property on the Xbox360GamePad class.

Next we will give the Bullet a PNG file and a Sprite to use. This process is essentially the same as when we added PNG files and a Sprite to our MainShip Entity so you may find these steps familiar.

To add the PNG:

To add the Sprite:

The next step is to add firing bullets. One problem which we encounter at this point is how to pass the bullets from our MainShip into the BulletList within our GameScreen. Fortunately, Glue has functionality built specifically for this scenario.

First we will mark the Bullet Entity as an object which is created by other Entities. To do this:

This property does a number of things, but most importantly it creates a class called static BulletFactory which we can use to create new Bullet instances in MainShip. When the BulletFactory is used, if the current Screen has a list of a Bullets then newly-created Bullets will automatically be added to this list for us.

If you are interested in reading more about CreatedByOtherEntities and the associated Factories, see the tutorial on this topic.

Next we will need to define a bullet speed. To do this:

Now we can use BulletFactory to create bullets when the player shoots. To do this:

Error The name ‘BulletFactory’ does not exist in the current context:If you are seeing an error about BulletFactory it is because you have not “fully qualified” the BulletFactory class. This basically means that we either need the full name of the BulletFactory, or we need to have a “using” statement to tell Visual Studio where to find BulletFactory. Fortunately, this is easy to do. For information on how to qualify types, see this page.

Notice that we are using the RotationMatrix of the MainShip to adjust the initial positions of the bullets, as well as their velocity

If you run the game you should be able to fly, turn, and shoot. 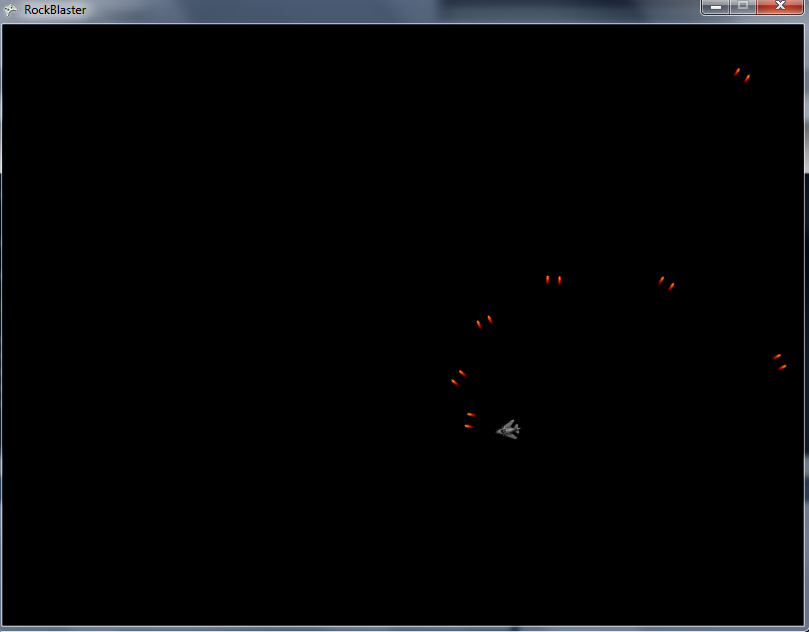 Although we have a long way to go, this is a big milestone for Rock Blaster. You can now see how the game feels for the very first time. Since relevant coefficients are set in Glue, you can change the values to make the game feel differently.

Now that we can shoot bullets we’ll need something to shoot at. The next tutorial will add the Rock Entity.