If you’ve made it this far through the RockBlaster tutorials, congratulations! We’ve covered a lot of topics in Glue and FlatRedBall. This last tutorial will clean up the game. All games require some polish and clean up before being finished. Normally this phase of game development takes a lot longer and covers far more than this tutorial, but we’ll keep it short to focus on Glue and FlatRedBall features.

All entities with collision currently draw their circles. This is useful for understanding how large the collision area is and to identify bugs, but we need to turn off the shapes before marking the game as finished. To do this: Repeat this process for:

Now our game looks much better without the white circles: If the user dies currently the game simply sits there and doesn’t let the player know what’s going on. We can add an end-game UI in Gum to announce that the game has ended.

Next we’ll want to detect if the game is over and show the hud if so. To do this:

Next we’ll want to implement EndGameActivity. To do this:

Now the GameOver will appear after all ships have died. If you have increased the ship’s health you will want to reduce it back to a reasonable number (like 6). This is important for the final state of the game as well as it will help you test the end game logic quicker. 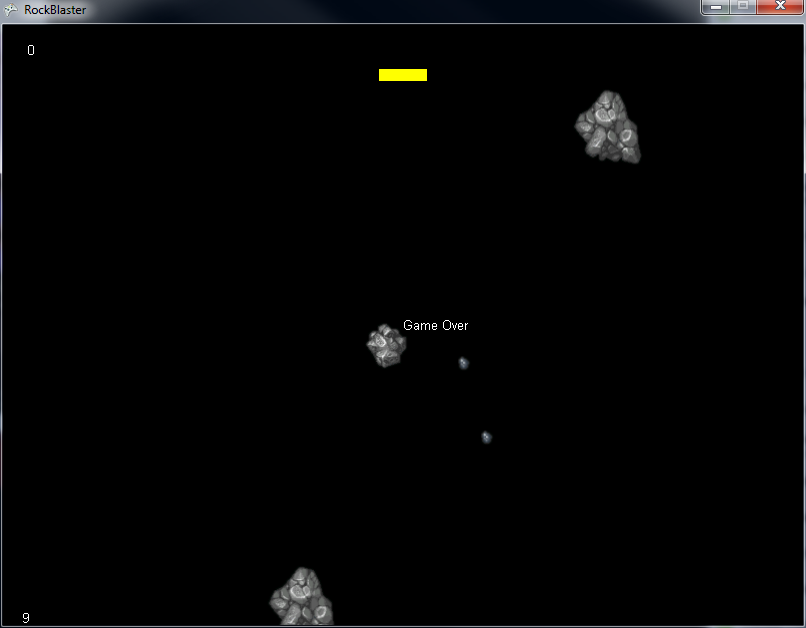 Not that we have the accumulation fixed we will need to remove the debugger code. To do this, open Game1.cs and locate the calls to the FlatRedBall.Debug.Debugger and remove those lines.

Way to go! You’ve just finished the RockBlaster tutorial series. We’ve covered a lot of features that are commonly used in FlatRedBall games. Of course there’s always more you can do to a game, and now that you’ve come this far we encourage you to experiment with the game. Here’s some things to try, some simple, and some more complex:

There are endless possibilities. Good luck!