The simplest scenario is when an instance exists as an Object in a Screen or Entity. The following image shows an instance called “CharacterInstance” under the GameScreen: 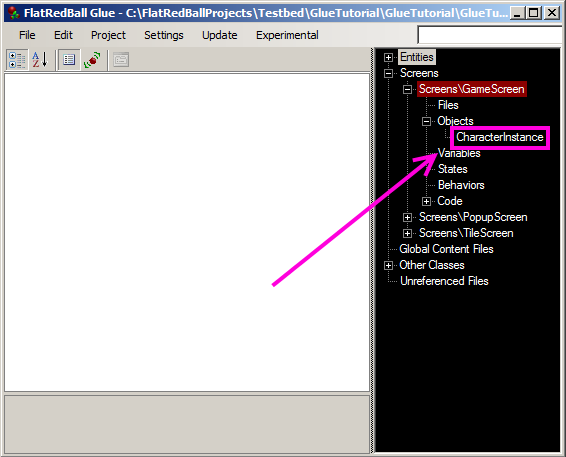 In this situation, the generated code will automatically handle calling Destroy. We can look at the GameScreen’s Destroy method to verify: 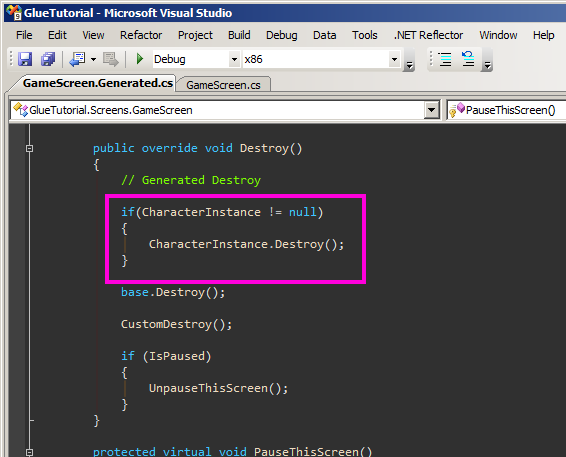 Instances added to PositionedObjectLists which are created in Glue 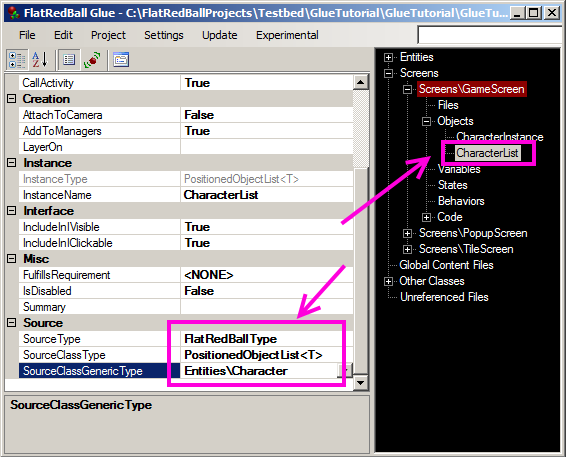 Now instances created in custom code can be added to this list. For example, the following code could be used in CustomInitialize of GameScreen:

How does the Generated code work?

You may be wondering how the generated code shown above works. The reason this code clears the list (and destroys all contained instances) is because all Entities inherit from PositionedObject. This means that they share a two-way relationship with any PositionedObjectList that they are added to. When an Entity instance is destroyed, it removes itself from any PositionedObjectLists that it is a part of. Therefore, when a Character instance it is destroyed, it removes itself from the CharacterList.

As you are developing your game you may find that you need to create an Entity instance in custom code. For example, you may do something like this:

At class scope:
In your Screen’s CustomInitialize:

At this point there is a Character instance in custom code; however, since it was completely created in custom code, Glue doesn’t know about this object at all. This means that you must:

These two requirements didn’t exist above because both in the case of an individual instance as well as a PositionedObjectList of Characters Glue called Activity and Destroy in generated code. Therefore, you will need the following code:

WARNING:
Unless you have a very good reason to do this, you should not call RemoveSelfFromListsBelongingTo on an Entity – calling Destroy will do this for you, plus it will take care of all necessary destruction.

Destroying instances in a PositionedObjectList prior to the Screen’s Destruction

As mentioned above, instances that are added to a PositionedObjectList which is part of Glue will automatically be destroyed when the Screen is destroyed. However, you may be creating a Screen which includes Entities which will be destroyed before the Screen itself has been destroyed.

If you are creating and destroying Entities during the life of a Screen (such as bullets fired by a character or score entries in a high-score table) then you will need to call Destroy on instances manually. Fortunately if your instances are part of a PositionedObjectList, you can simply call Destroy on any instance that needs to be destroyed and it will automatically be removed from any PositionedObjectLists that it belongs to.

For example, if you want to destroy Bullet instances which exist in a BulletList when they collide with CharacterInstance, you could do so as follows:

Notice that the code uses a “reverse for-loop”. For more information on this, see this page

WARNING: Unless you are otherwise accounting for Entities in a PositionedObjectList which has been created in Glue, you should never call methods on the List itself which remove elements from it. In other words:

Calling Destroy from within an Entity

The great thing about the Destroy method and its ability to remove instances from any PositionedObjectList that it belongs to is that you never have to worry about having container Lists in scope when destroying an Entity. For example, consider a situation where a Bullet Entity keeps a timer of how long it has been alive, and destroys itself after a given number of seconds. This logic can take place inside the Bullet Entity’s CustomActivity method:

If your game has a BulletList in the GameScreen, the code above will automatically remove the instance from the BulletList – even though your code never explicitly removes the object from that list.

This means that Destroy can be called at any point by any object (Screen, the instance itself, or even other Entities that may have a reference to the instance that should be destroyed) and all lists will automatically be maintained for you.

Of course, be sure that if you do this inside of a loop that depends on the size of a list that will be modified, the loop should be reverse (as shown above). In the rare situation where a call may destroy more than one instance of an Entity, you will need to have additional checks on your loop, or you will need to modify the index integer.

While this may seem counter-intuitive, Entities which are Destroyed can still have their Activity methods called. The reason for this is because the Destroy method removes the Entity from any PositionedObjectLists, but does not alter the logical state of an Entity. If your Entity has been added through a PositionedObjectList in Glue, then you don’t need to worry about this. If you have a standalone instance of an Entity inside another Entity or Screen, then you may encounter this problem.

This means that if you intend to destroy an Entity before the containing Screen is destroyed, you must do one of the following things: