Custom Variables are variables which can be added to a Screen or Entity to be used either in custom or generated code. There are three types of variables:

Let’s go through each type to show how they work. As a note for content creators, variables are the key to reusing your Entity instances, and very important when creating a user interface (UI).

An exposed variable is actually not really a new variable, at least as far as programmers are concerned. Instead, exposed variables are simply a way to access variables which programmers already have access to. For example, all Entities can be positioned. This means they all have X, Y, and Z positions. In code, you simply have to change the X value of an Entity, and unless it is attached to another Entity, it will be repositioned.

You can expose the X, Y, and Z (among many other) variables in Glue so that you can modify entities.

Why aren’t all variables exposed by default?

You may be wondering why you have to go through the trouble of manually exposing variables like X, Y, and Z on an entity. There are a number of reasons for this:

To add an exposed variable:

You should now have an X variable under your Character Entity, and it will have a default value of 0. 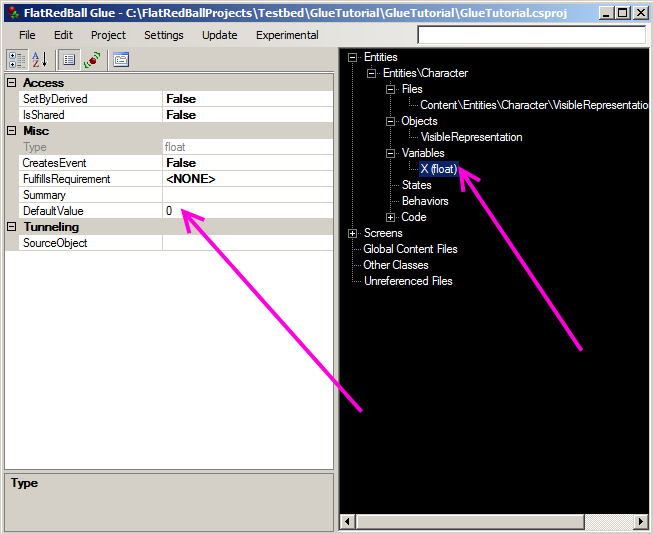 Variables can have default and instance values

Accessing a variable in an instance

If you run the game, you will now see that your object has moved 5 units to the right. Don’t worry if your game looks different, I have removed the background from my Screen so we can focus on the Entity. 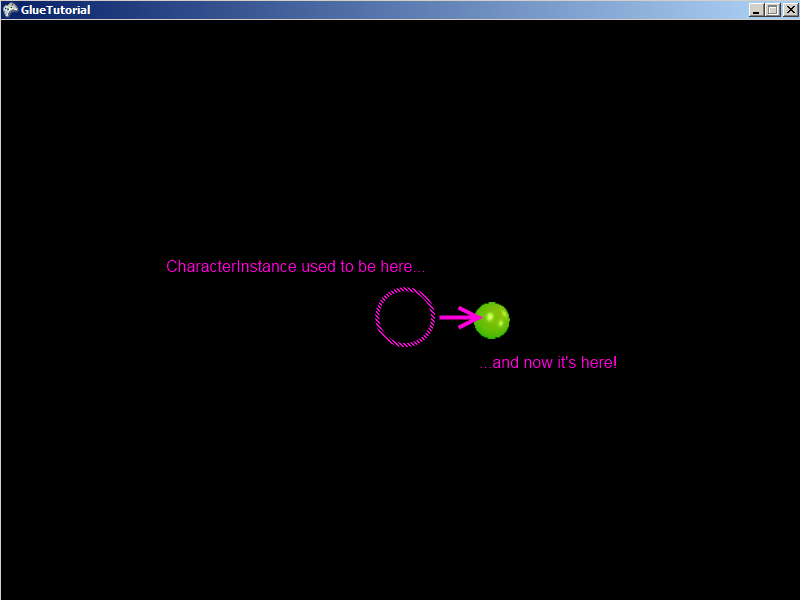 Tunneled variables are similar to exposed variables, except they give you access to variables that belong to objects inside of a Screen or Entity. For example, in the previous section we showed how to move an Entity around. But what if we wanted to change the scale on the Sprite inside of the Entity. Entities themselves don’t have size – at least until you add an object (such as a Sprite) which gives them size. That means that the size property is not a property of the Entity itself, but rather a property of the Sprite which belongs to the Entity.

Let’s look at an example of how to work with tunneled variables.

To add a tunneled variable:

If you select the VisibleRepresentationScaleX variable that we just created, you’ll notice that the default value is 0. This means that the Sprite in your Entity will be too small to see. Make sure to change the default to 1 (or some other valid value). 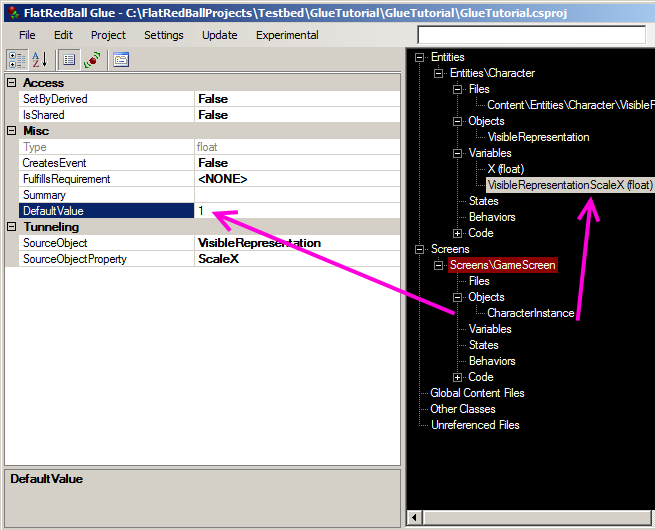 Now you can simply select your CharacterInstance inside of your GameScreen and you should see its “VisibleRepresentationScaleX” variable as an editable property. Change this value to 4. 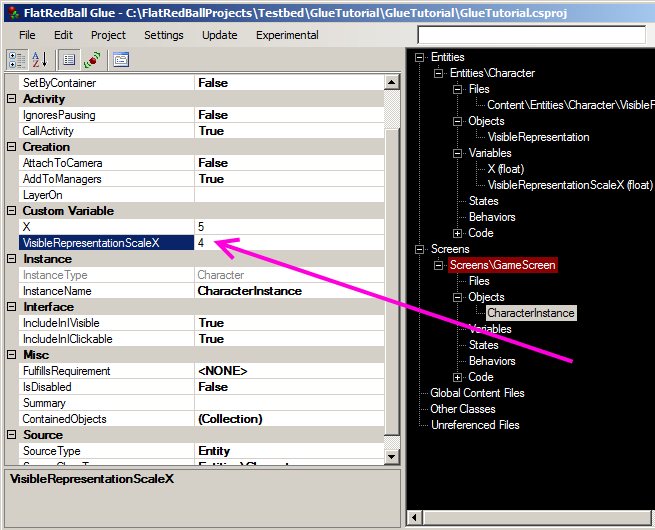 Now run the game and you should see your Character be much larger. 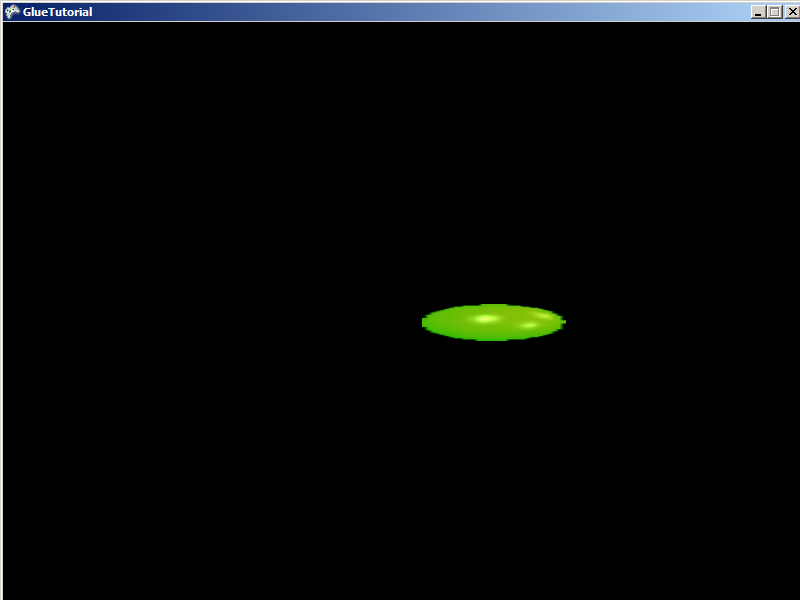 The answer is because changes to source content (the .scnx in this case) apply to every instance of your Entity. But if you make changes to tunneled variables on the instance itself as we did in this demo, it will only impact this particular instance.

So in this particular case, changing the ScaleX on the CharacterInstance didn’t make a lot of sense because it could have been done in the .scnx file, but consider a situation where you create a Button Entity which has a SpriteFrame and Text object. With tunneling you could change the size of the button and what the text says on an instance-by-instance basis…all through Glue. And with exposed position values, you could position, size, and set the text on buttons all in Glue. This approach is very common when building UI screens in Glue.

The process of creating new variables is almost the same as for creating exposed and tunneled variables. To create a new variable:

Using a new variable in code

When a new variable is added, a new field is added to the Screen or Entity class. You can use this variable in code just like you would any other variable. In fact, you can add a variable in Glue, then switch back to Visual Studio and you will immediately have access to the variable – even with auto-complete! 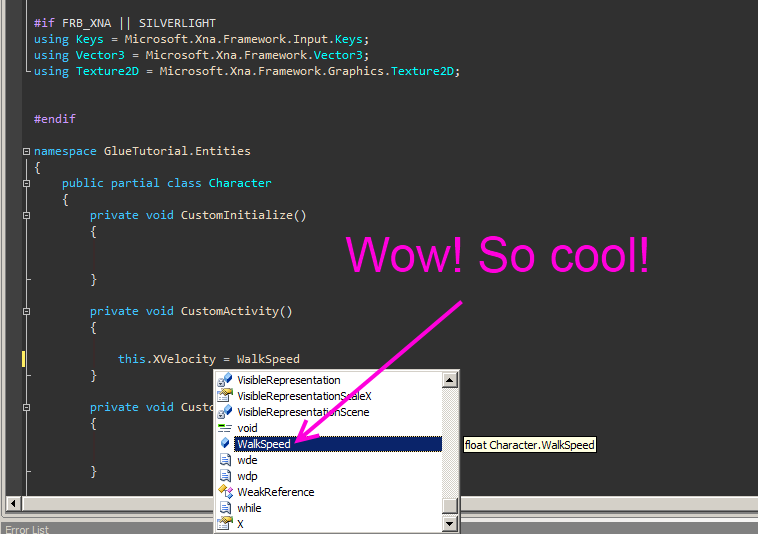 If you ever find yourself creating coefficients for behavior in code, consider where that should be promoted to a variable in Glue. It gives you freedom as a programmer to be able to worry about the system while allowing the designers to tune behaviors without any conflict or possibility of them writing bad code.

Since Glue allows you to create variables which are essentially identical to fields you would create in your class, you may be tempted to define all of your variables in Glue. We strongly recommend not doing this. As mentioned above, keep in mind that Glue is intended to provide a higher-level interface to your objects. Therefore, you should not add variables excessively to Glue to avoid defining them in code. You should add a variable to Glue:

To the next tutorial ->