The rest of these tutorials will present ideas for reducing render breaks, but we’ll do so by working on a real project and measuring the result of our changes.

This tutorial assumes you are familiar with how to create a FlatRedBall project. Although the following tutorials will be almost all code (as opposed to being created through Glue), we will still create our project through Glue and add a Screen to contain our tests in Glue.

To set up your project:

Once your project is created, add a Screen:

Next we need to set up our game to measure performance. To do this:

Also, when measuring you will want to run the game without being attached to Visual Studio. You can accomplish this by either:

Finally we’ll add some reporting output to TextureTestScreen.cs. To do this: 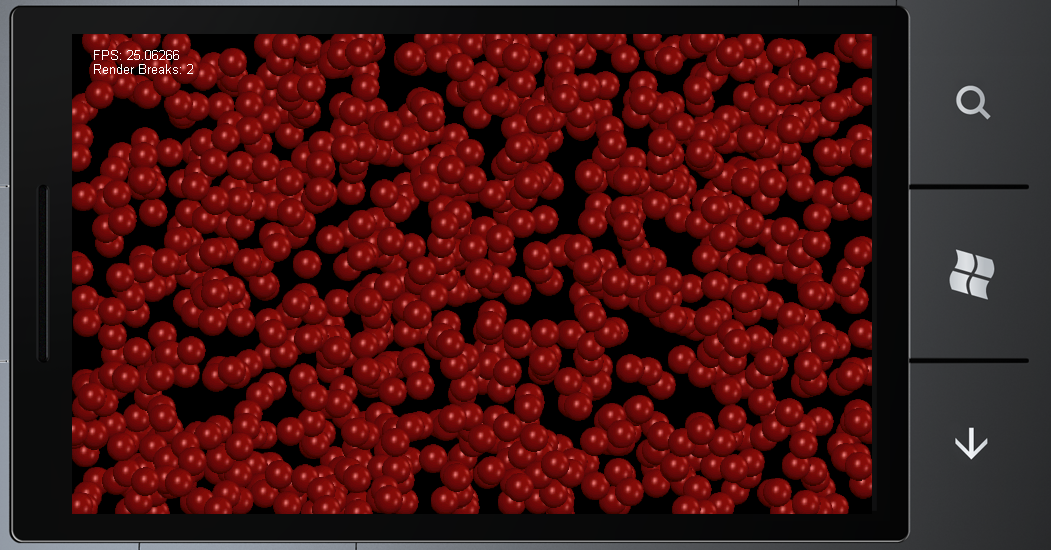 Although my screen shot reads 25 fps, the emulator actually was pegged at around 29 fps normally. Also, the engine currently creates two render breaks while rendering this frame. This is likely because of the Sprites creating one and the Text used to render the output creating a second. This small number doesn’t matter so much. Render breaks can become an issue when dealing dozens or hundreds of render breaks, as we will show soon.

Next we’ll use the second texture (greenball) to introduce render breaks to the system that we have. We will do this by by making every-other Sprite use the greenball texture. Also, to maximize render breaks, we will also adjust the Z of each Sprite so that each Sprite has a smaller Z value than the one before it. The result will be that the Renderer will need to create a new render break for each Sprite. To do this, modify the CustomInitialize method so it looks like this: 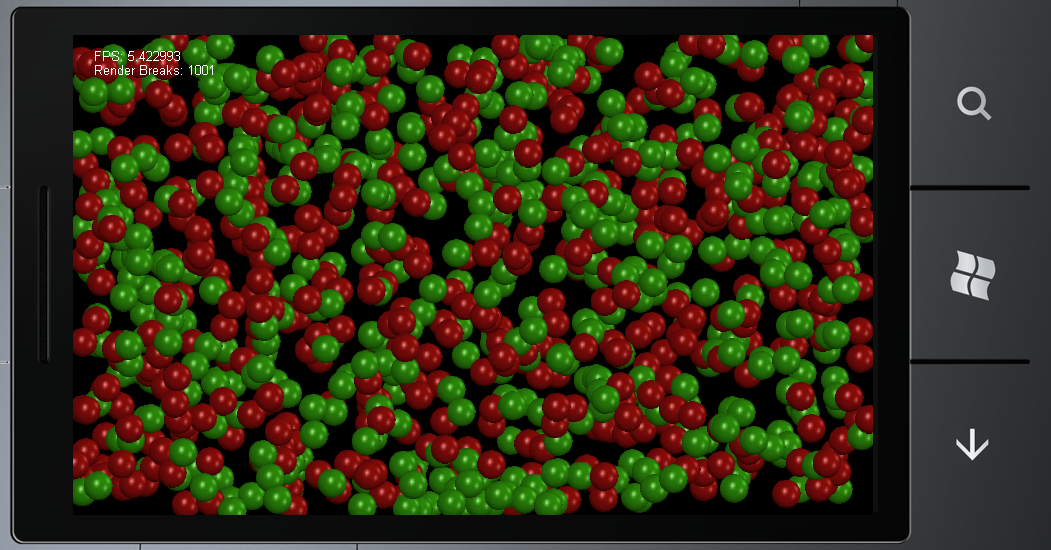 Notice that the frame rate which was previously pegged at 29 (the Windows Phone limits it to 30) is now around 5. We’re still rendering the same number of Sprites, and they’re approximately the same distance away from the camera so fill rate should be about the same. We only introduced a second texture which we switch back and forth between on every Sprite.

Emulator vs. Phone:Ultimately when you are measuring performance you will want to measure it on the actual device. Even though the emulator does a fantastic job of allowing you to test Windows Phone 7 games on a PC, it does not mimic every characteristic of the phone. We’ve also noticed that the emulator is subject to the speed of the computer it is running on, so your PC may also add variability to the measurements.

The above two pieces of code (which ran at 29 fps and 5 fps respectively in the emulator) ran at 29 and 12 fps on my HTC HD7 phone.

Notice that we are pegged at 29 fps when using the same texture. I also tried increasing the Sprite count higher and got the following:

We will continue to use the emulator for screen shots and measurement of performance for the rest of these tutorials; however, we recommend always measuring changes you make to your program on the actual device.