So far we’ve covered how to create a new Gum project in your Glue project and how to add Gum screens to your FlatRedBall screens. This gets us a considerable amount of functionality already, but it’s very likely that you’ll need to interact with Gum objects in code. For example, you may use code to dynamically set the visibility of certain UI elements according to the game’s state.

This tutorial will explain how to work with the GraphicalUiElement in code – the class that is at the heart of Gum. For information on how to fully create a component in code (as opposed to relying on its creation in Gum), see this page.

If you’ve been following along the previous tutorials, then you should have a Screen that has two Gum objects: a Text and a ColoredRectangle.

For this tutorial will make some modifications to the ColoredRectangle in our custom code.

The first step is to create a Glue object. To do this:

Note that the Source Name: drop down contains all instances in your Gum project. We selected the ColoredRectangleInstance for this example, but you could select any instance when working on an actual game.

Option 2 – Getting Objects by Name

The steps above show how to access a Gum object by adding an Object to the Glue screen. This approach has the benefit of reducing the possibility of coding errors, but if you have a lot of objects that you are accessing then your screen object list may get very large.

Notice that we use the name ColoredRectangleInstance. This needs to match the name of the instance in the Gum screen exactly, including capitalization: 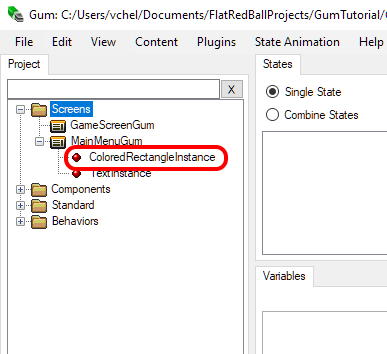 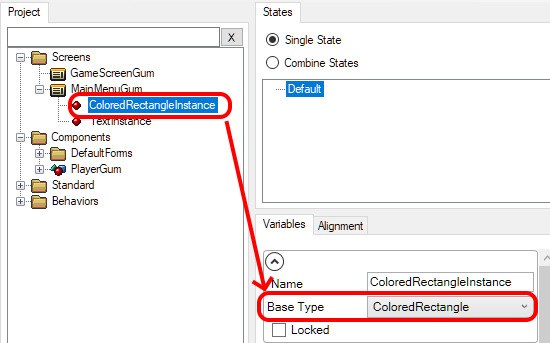 Similarly, objects from Gum can be modified in CustomActivity. You can modify your MainMenu’s CustomActivity so it looks like this: 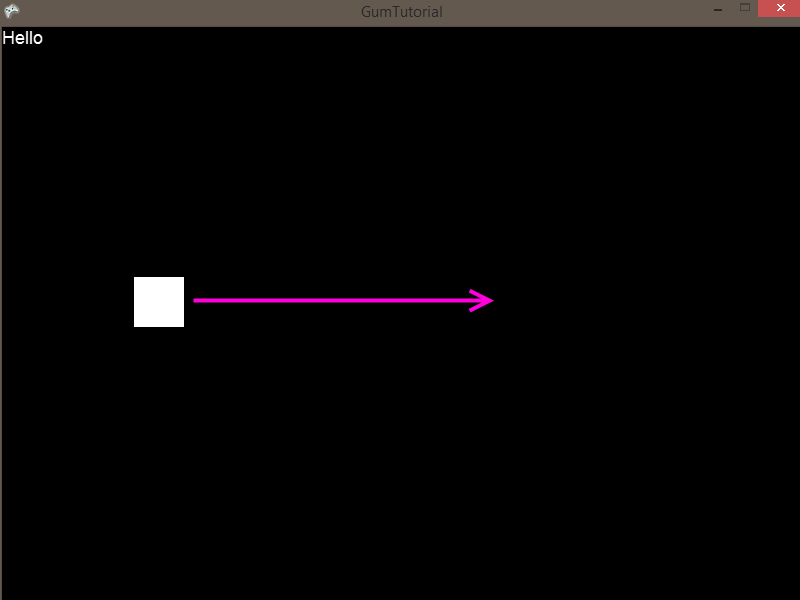 The example above shows how to move the rectangle. For this example we will modify the Text object to display score. We will increment the score whenever the player presses the space bar. This is just a simple example to show how to show a score. A real game may increase the score on an event such as when a bullet hits an enemy.

We will access the TextInstance purely in code – but if you are more comfortable using the drag+drop approach to access the Text object, feel free to do that instead.

To display a score, modify the MainMenu code:

Again, keep in mind that we need to access the TextInstance using the exact name in Gum:

When used with Glue, Gum objects will behave identically to how they behave in the Gum tool. This not only applies to Y positioning but as we will see in later tutorials with position and width unit types as well.

This tutorial has shown how to access objects from Gum in code. Just like objects from FlatRedBall file types (like .scnx and .shcx), Glue will generate objects which we can edit in code with full compile-time protection and Visual Studio IntelliSense.

The next tutorial will show you how to use UI events (such as Click) on Gum components.