To assist in debugging I have created an extensible interactive input and output console logging system, very similarly to the console system made popular by the Quake games. This system allows execution of commands through a command processing engine (by default it uses javascript but any language can be easily hooked up).

With this system it is possible for developers to view debugging output and interact and update C# objects and methods from within their game. This allows developers to change AI behaviors, spawn entities, load levels, and much more. 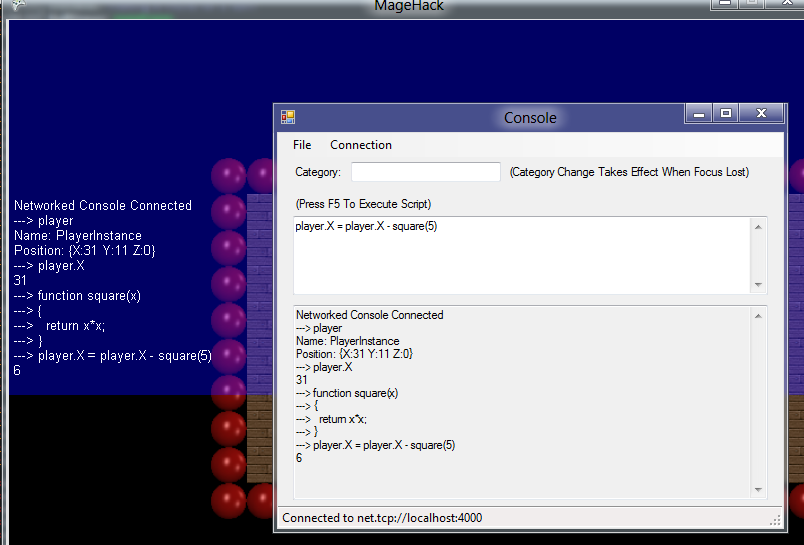 Now you can load your game up and press the ConsoleToggleKey to open and close the console window.

With the default setup any javascript can be run, including:

Below are lower level details on how the console system works.

In order to receive output from the console you must create a method that implements the following delegate:

Once registered (coming up) this method will be called any time any output is sent to the console that the system thinks should be sent to this method (more details on that in a bit).

The first parameter is a list of strings that contain the new output in the order in which they were printed, so newText[0] is the first line added to the console and newText[1] is the line of text added next. The second parameter defines the category of the output. More about that when we describe registering this method with the console manager.

Once created your code must register this method with the console manager via the following method on the ConsoleManager class:

The first parameter is the handler method created to receive console output, with a signature matching the OutputDisplayUpdatedDelegate. The second parameter is optional, and is the name of the category of output that your handler wants to be notified of. For example, if you designate all AI output to have a category of AI, then any handler not subscribed to the AI category will not be notified of AI output. A single instance of a handler method can be registered for multiple output categories.

Observant readers will notice that even though we are subscribing a handler to a specific category, the console will call the handler with the output’s category. The reason for this is because if a handler is subscribed to no category (null or empty string), then that handler will receive all output regardless of category. This allows the handler to do any special handling on text based its categorization, such as changing the color or adding a prefix based on the output’s category.

Once a handler method is registered it will be immediately called once output is sent to the console. In order to stop the handler method from receiving output, the following method must be called on the ConosoleManager class:

Unlike when receiving output, your code does not need to do any registration prior to sending commands to the console system for processing. All that needs to be done is making a call to ConsoleManager.Instance.ProcessInput("command text", "category"). All output that is created from processing the command will have the category passed in to the ProcessInput() call. If no category is desired the parameter can be left out (or set to an empty string)

The actual processing of commands is done through an implementation of the IConsoleProcessor interface. This abstraction allows developers to extend the console system to use any language they want, from python to Lua. All that needs to be done is to create a new class that implements IConsoleProcessor and code in all the required methods. See the Python example for how this is done.

When making C# objects and methods accessible to the console you must make sure to keep in mind that those objects need to be removed, otherwise the console system may still hold references to the objects, preventing them from being collected by the garbage collector.

When you no longer need an object, you can remove the object from the console by calling public void UnregisterObject(string name, object obj) method on the ConsoleManager class. To quickly remove all objects from the console added by a specific class, you can use the public void UnregisterObjectsFromSource(object source), where the source object should be the same as used to register the C# objects.

In order to use the the console you must import the entity into your project via Glue. To do this:

Another example of the use for the console system is to log data to a text file for later review. For example, if you want to run through a scenario and capture all of the AI states that occur during a turn this becomes immensely helpful. I included the following class in the ZIP for the console.

You can now log output from a specific category in two ways:

The code on [1] contains a project for a Winforms application that can connect to your FRB game and utilize the console over the network. This will allow you to play your game full screen and issue console commands and debug from another computer if desired. It also allows you to save and load console commands from script, pause console output (for easy reading) and saving console output for later reading.

In order to enable this for your game:

If Javascript is not your cup of tea, this section will show you how to extend the console system to allow for other languages. I will be using Python as an example, but the concepts here can be applied to any language.

First, download IronPython and add the libraries to your project.

Next create a new class called PythonConsoleProcessor<tt> and have it inherit from the <tt>IConsoleProcessor interface. After you visual studio’s helpers to add all the required method signatures you should end up with:

Now we need to create variables to store the python engine and a constructor to initialize it, so add the following to your class:

This initializes the python engine and give us a scope to add and remove objects from. Next we need to flesh out the code to process input. Remove the NotImplementedException from the ProcessInput method and replace it with:

This will run commands through the python engine and return the result, if any. If an exception occurs the message will be sent to the console.

Note: Usually you do not want to do catch (Exception ex) as that is bad practice. However, since IronPython has a lot of exceptions that can be thrown it’s hard not to. If you look at the javascript processor I am more specific with exception handling.

Now to add code to register and unregister objects with the python engine:

Now run your game and you will have full python support.