The Game Scripting Plugin includes a Windows form which gives you real-time information about the state of your script. This is useful for the following reasons:

The debugging built in to the scripting plugin can only be used on Windows. Of course, you can still use regular Visual Studio debugging on other platforms.

To integrate the debugging form, you must already have:

If you are unsure about how to do any of the above steps, you should review the
game scripting implementation tutorial.

For the rest of this tutorial we will use a Screen called GameScreen – this is the name of the Screen that was used in the game scripting implementation tutorial.

You need to add references to your project which are used by the debugging code. To do this:

Adding Debug Controls to Your Project

Next we’ll add debug controls to our project.

The Debug control is only available on Windows platforms (because it uses Windows Forms), so the code is surrounded by a WINDOWS pre-compile directive.

To access this, you will need to add WINDOWS to your project’s conditional compilation symbols:

To add a debug form, open GameScreen.cs (or the custom code file that contains your ScriptEngine-inheriting class.

Add the following to your Screen’s CustomActivity

Note: You will need to add the following using statement to qualify the ScriptDebuggingForm:

If you run the game you will now see the debug window list the events you have in your game. 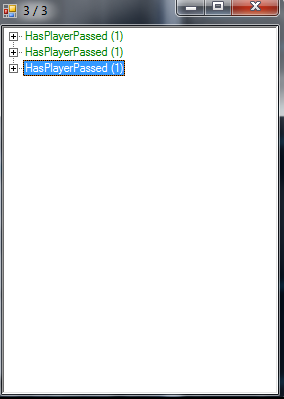 The Script window already shows us some useful information. We can see that we have 3 scripts which have conditions “HasPlayerPassed”. This name comes from the “HasPlayerPassed” function which is called in our If’s in the game script. The debugging form automatically detects this as the name based off of the method that created the delegate.

Also, the debugging window tells us how many actions exist in the script in parentheses. Each script has one action, so each says (1) after the If call.

The scripts will default as written in black. When they execute, they will change to green, so you will be able to see how scripts execute in real-time.

Finally, you can expand the scripts to see the names of the actions that will execute. 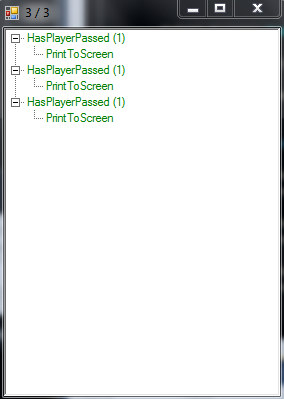