State categories will appear as folders in Glue which can contain any number of States. 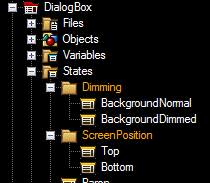 Note that categorized cannot be added inside of other categories.

To add a state category:

By default a category has access to all variables on a Screen or Entity. For example, the following Player entity includes 10 variables: By default all variables appear in the the State Data tab when viewing one of the categories, as shown in the following image:

The first benefit is visibly obvious but the second benefit is more subtle. To see the effect of excluding variables, consider the example shown above before variables are excluded. FlatRedBall would generate the following code. Notice the Armor class includes properties related to the weapon as well as X,Y, and Z values for positioning the player:

Also the CurrentArmorState property setter assigns these values as shown in the following code snippet:

This state will likely cause a bug since it assigns the position of the Player and may unintentionally alter weapon-related values. Therefore, excluding these variables is important to keep the game behaving as intended.

StateData is the concept of treating states similar to CSV data. Glue supports treating States as CSV data by providing a CSV-like interface when selecting a category, as shown in the following image: For an in-depth discussion of State Data, including how to exclude variables from inclusion, see the State Data blog post.

The SharesVariablesWithOtherCategories controls whether the State Category shares variables with other categories. This value is false by default. If you set the value to, then the only purpose of the category is organizational in Glue – all states contained in the category will behave the same as if they were not contained in any category.

If this value is set to false, then the category will be treated separate from other categories and from uncategorized states. This means that the category: