One of the most important concepts in programming (and using Glue) is exposing and limiting access to object properties and methods appropriately. If you expose too much, then you risk a complex interface, create dependencies which make reuse difficult, eliminate the option of encouraging best practices through interface, and clutter up your auto-complete functionality in your IDE. Of course if you limit too much, you make it difficult for one object to access information that it needs from other objects.

This article discusses a very specific yet common case in games: access and ownership of shared PositionedObjectLists.

For starters let’s look at a very common situation where this problem is encountered. You’re working on a shoot ’em up game like 1942 or R-Type which includes a Player Entity (the ship), Bullet Entity (fired by the Player), and a GameScreen. In this type of game you typically would also have an Enemy Entity which we’ll mention throughout the discussion, but we won’t actually create an Enemy Entity for the sake of simplicity.

Typically the GameScreen stores individual instances and PositionedObjectLists of all objects involved. In other words, the Screen may have a PlayerInstance object, EnemyList object, and BulletList object. The GameScreen then performs collision between the different classes of objects: Player vs. Enemies, Bullet vs. Enemies, and so on. This approach makes sense because the GameScreen ultimately “owns” these objects – it creates these objects and it is responsible (either through generated or custom code) for destroying these objects when the Screen is destroyed.

Since Glue supports the creation of PositionedObjectList Objects, then it also makes sense to add these objects to your GameScreen through Glue. Therefore, we will have the following situation: 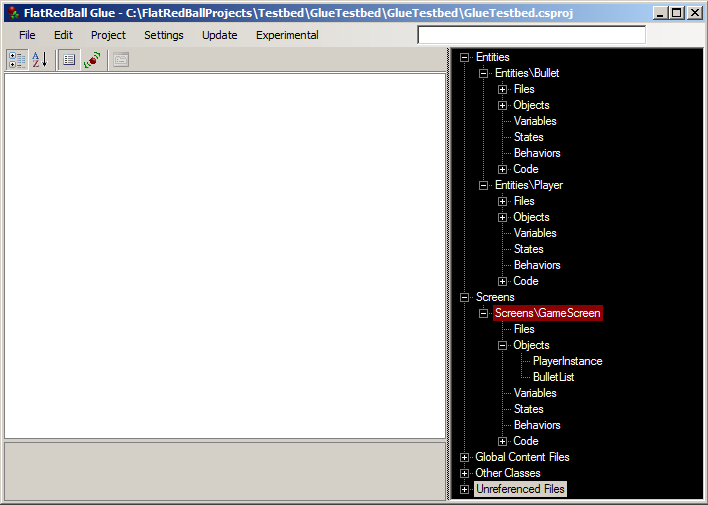 Next we’ll look at the code that creates bullets. It’s best if the Player contains all of its logic, so this function is a method called from the Player’s Activity method:

The newly-created Bullet needs to end up in the GameScreen’s list, but how? The Player doesn’t have a reference to the list, nor does the Screen expose the List publicly.

Both of these options would work, but each one introduces some problems. The Player could be given a reference to the PositionedObjectList by the Screen. However, this means that custom code must be written to hook this up, and if multiple objects can create bullets, each one must be given access to the PositionedObjectList. It may not seem like a big deal in this case because we’re only working with one object – the Player – which can create Bullets; however, this tutorial is meant to be a general-purpose discussion about how to share lists, and there are many other situations where multiple types of objects can create the same kind of Entity. And in such a situation, you need to make sure that you write custom code to receive and use the PositionedObjectList in every type, and you must also make sure that your Screen properly assigns the reference for every instance. Glue offers a solution which requires less work.

Factories as the Solution

The solution to this problem is to create a middle-man. This middle man will be called “BulletFactory”. The BulletFactory is a class which creates Bullet instances, and provides a way for the Player Entity (or any other Entity) to add Bullets to the GameScreens PositionedObjectList.

Let’s start in Glue first. To create a Factory:

That’s it! Now your game contains a BulletFactory class which you can use in your code.

Note that we won’t be worrying about pooling in this tutorial. Pooling requires a little extra work to function properly, and this is beyond the scope of this particular tutorial. For information on pooling check this page. 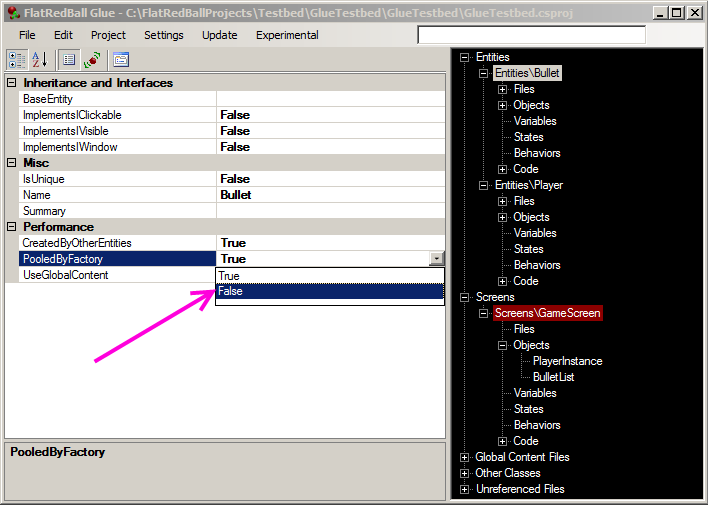 Using the Factory in code

Using a Factory couldn’t be easier. Creating a Bullet now takes 1 line to create and then you can modify the bullet (such as set its position)…that’s it! Modify your code to match the following snippet:

At this point we could end the tutorial because we’ve accomplished what we’ve set out to do. Our Player creates Bullets through a factory, and the Bullets are placed in the GameScreen’s BulletList. “But wait!” you may be thinking, “How are the Bullets being added to the GameScreen’s PositionedObjectList? I don’t see any code that does that.”

You’re right, the code that does all of this is happening behind the scenes; however, we should explain how this all works so you’re not left scratching your head.

How does this all work?

The reason this works with so little hookup on your part is because of assumptions Glue makes regarding this pattern. There are a few things which must happen for this to work correctly:

You’ll notice that the BulletFactory’s Initialize method does two things:

If you’re really curious how this works internally, you can look in the BulletFactory.Generated.cs file. Note this code in the CreateNew method:

This line of code stuffs the newly-created Bullet (named “instance”) in the mScreenListReference, which is a reference to the PositionedObjectList passed in the Initialize method.

If you want to know more about how lists and factories work, especially if you are using inheritance, check the page on the Factory.Initialize method here.

This works in any Screen

Now that you have set this up, all you have to do is add a PositionedObjectList of type Bullet to any Screen (through Glue) and any object that uses the BulletFactory will automatically populate this list. There is no extra hookup required, and your Entities do not need to know about the Screen that they are working with.