Entities which can collide with other entities or environments (such as terrain in a platformer) can have their ImplementsICollidable property set. Setting this property to true simplifies writing collision code and makes your code more resistant to changes made to collision objects in Glue.

When creating a new Entity, Glue will give you the option to mark it as ICollidable. The most common approach is to add a shape on the entity when creating it. For example, if the AxisAlignedRectangle check box is checked, Glue will automatically check the ICollidable check box.

If an entity is already created but not yet marked as a ICollidable, it can be marked as ICollidable in its Properties tab. 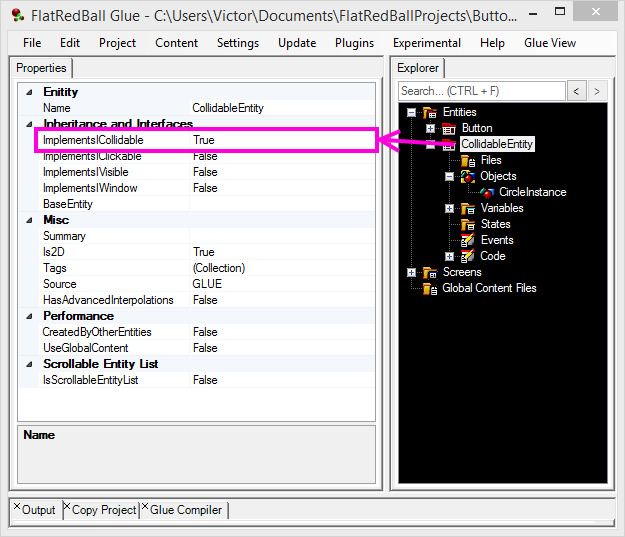 When marking an existing entity as ICollidable, be sure that your entity has a collidable object, such as a circle.

For more information on colliding Entities and using ImplementsICollidable, see this page.

CollideAgainst is useful when you only need to detect if two things are touching, but the objects do not need to be re-positioned in response to the collision.

For example, the following code shows how to perform collision between a ship and a list of enemy bullets:

CollideAgainstMove can be used to collide two objects, and re-position them according to their masses, as shown in the following code:

Notice that the code above did not have to access the specific shape(s) in FirstBallInstance or SecondBallInstance to perform the collision.