The PositionedObject is an object which contains properties and functionality for position, rotation, attachment, velocity, acceleration, and instructions. It serves as the base object for common FlatRedBall classes such as the Camera, Sprite, Emitter, and Text objects.

Absolute position can be directly controlled through the X, Y, and Z properties as well as the exposed Position field. The following code creates three Sprites with various positions. Note that the default position of a PositionedObject is (0,0,0). Also, note that in the screenshot below, the Z value impacts the size of sprite3 , implying that the game is using a 3D Camera. 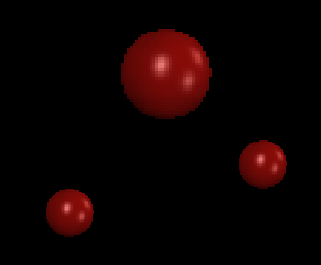 The default view in FlatRedBall is down the Z axis using a perspective view. Therefore modifying the Z value of PositionedObjects can result in apparent changes in size.

Velocity represents the speed at which an object is moving. Mathematically, it represents the change in position measured in units per second. While the PositionedObject itself does not apply velocity automatically, any PositionedObject-inheriting instance which is created through or added to FlatRedBall managers will have its velocity automatically applied to its position. This is the case for Sprites, Cameras, and Text objects.

Similarly, Acceleration modifies velocity on all objects which belong to FlatRedBall managers. It represents the rate of change of velocity in units per second. Acceleration is often used to simulate forces applied to an object such as gravity or a rocket’s thrust.

The following code creates two Polygons. One moves to the left while the other begins moving up and to the right, but falls downward as if affected by gravity. Although the section covering position used Sprites, this section uses Polygons to show that the same code works on many FlatRedBall types.

Most PositionedObjects like Text objects and Sprites are managed by managers as listed above. However, it is common practice to create objects which inherit from PositionedObjects. When one of these objects is instantiated it is not automatically managed, therefore fields like Velocity and Acceleration are not applied. In other words, the following code will NOT result in an object that moves across the screen:

The SpriteManager can also perform common management on PositionedObjects. Therefore, adding the following line will result in the object being managed by the SpriteManager and exhibiting all expected behavior:

To remove an object that has been added this way from management, call: