For example, to collide a Player entity against a wall (assuming the entity implements ICollidable):

Inversely to have a player push a block, and have the player not slow down at all when pushing the block:

To have both objects impacted equally by the collision, the same mass can be used. For example, if two cars collide (again assuming that the cars implement ICollidable)

Any value can be used for the mass of the two objects – you’re not limited to using 0 and 1. We use 0 and 1 above to express intent – that one object should be mass-less, or that the two objects should have the same mass. For example, a heavier object could collide against a lighter object:

The following code loads a .plylstx to create a PositionedObjectList containing Polygons. Another Polygon is created which is controlled by the Keyboard. Move collision is used to keep the moving Polygon and the Polygons loaded from the .plylstx from overlapping. Notice that the mass variables can be modified to allow for different collision behavior.

Add the following in Initialize after initializing FlatRedBall:

Add the following in Update: 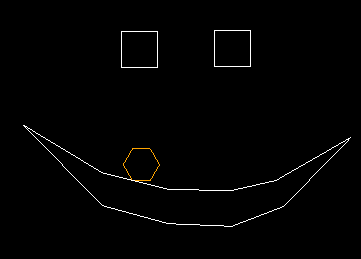 In brief mathematical terms, the CollideAgainstMove repositions the calling shape and the argument shape along the vector that is normal to the surface vector at the point of collision. The amount that each object moves when colliding depends on the two masses passed in to the method.

For example, consider the following situation. There are two Polygons – ball and surface. The ball has a positive XVelocity and negative YVelocity, causing it to fall down and to the right toward the surface Polygon: 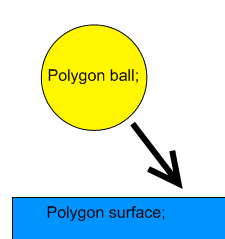 Eventually the ball will overlap the surface. Let’s assume that the following method is being called every frame:

In this case the ball is given a 0 mass and the surface is given a 1 mass. In other words, surface will never be moved by this method while ball will.

When a collision occurs, the vector of the edge where the collision happened is determined. Then the normal (perpendicular) vector is calculated and the shape(s) is (are) moved along the normal vector the required distance to separate them. For example, the first time ball penetrates surface, the following edge vector and reposition vector are calculated: 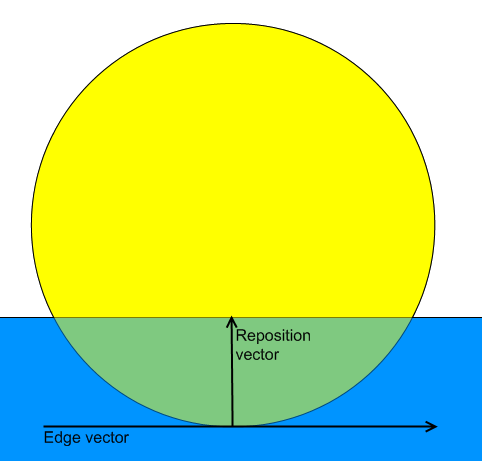 Since this CollideAgainstMove resolves this penetration, it is never seen when the engine draws the shapes. But if the velocity of ball is not changed, then it will continue to penetrate surface every frame, then get pushed back out every frame. The result is what appears to be a smooth sliding movement across as follows: 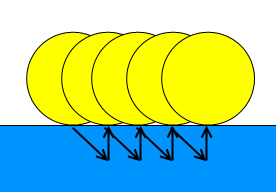 If one of the colliding shapes is an AxisAlignedRectangle then the direction of the “move” (the reposition) is subject to this value. For more information, see the RepositionDirections page.