A short discussion about two-way relationships

The reason that this relationship exists is so that objects can remove themselves from all PositionedObjectLists that they are a part of automatically when removing them through the engine. Any “Remove” method offered by FlatRedBall managers will remove the argument object from all of its lists – at least for all PositionedObject-inheriting objects.

A two way relationship is a relationship between an object that implements the IAttachable interface and a class that inherits from the AttachableList class. Normally when objects are added to lists, the list stores any number of objects, but the objects themselves are not aware of which lists they belong to. These are known as “one-way” relationships: the knowledge of membership only exists in the list object.

And similarly, when an IAttachable is removed from an AttachableList, the following occurs:

Two way relationships exist to eliminate scope problems when removing an IAttachable completely. The FlatRedBall Engine often uses AttachableLists internally to categorize Sprites. For example, Sprites which belong to the SpriteManager can be either automatically updated or manually updated. Each is stored in a different array.

Similarly, it is common practice to create AttachableLists to organize objects by their behavior. Common examples include placing Polygons which represent triggers in a level in a PositionedObjectList or to organize player bullets and enemies in separate SpriteLists.

A bullet and enemy SpriteList example clearly shows the kind of problems which can occur in the absence of two-way relationships. When a bullet collides with an enemy, it should be completely removed from the game. Not only does it have to be removed from any internal SpriteLists (such as lists in the SpriteManager), but also from the programmer-created list of bullets that it belongs to. In the absence of a two-way relationship, at least two calls would be required:

This is inconvenient at best. It also requires code to be written in pairs (or more if an object is part of more lists).

The two-way relationships between IAttachables and AttachableLists enables any method to remove objects from all lists both engine and user created through the use of globally-visible static managers such as the SpriteManager and TextManager. Simply calling Remove on an object’s manager automatically removes it from all lists that it shares two-way relationships with.

There are two common situations in which one-way AttachableLists are used:

The reason for two-way relationships is to remove unused IAttachables from all AttachableLists which reference them. However, if an AttachableList has a short lifespan, then it will likely fall out of scope before any IAttachables that it references are removed.

A third reason to avoid two-way relationships for short-lifespan AttachableLists is exemplified by the following code.

First, consider what occurs when the following code is executed. 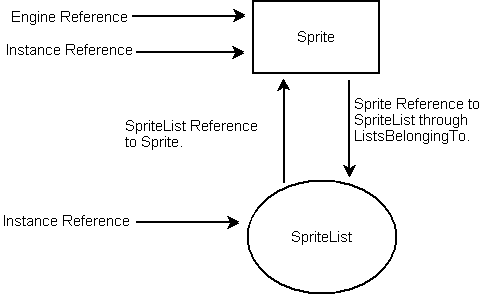 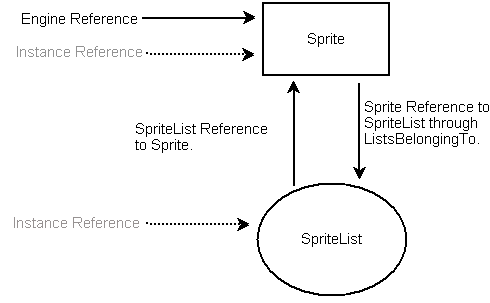 Now, consider the result of using AddOneWay instead of Add: 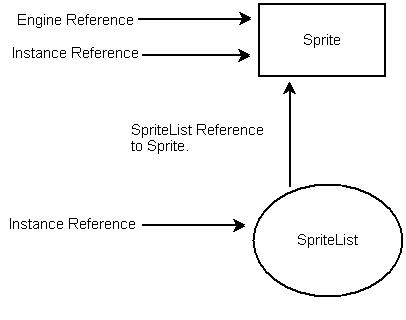 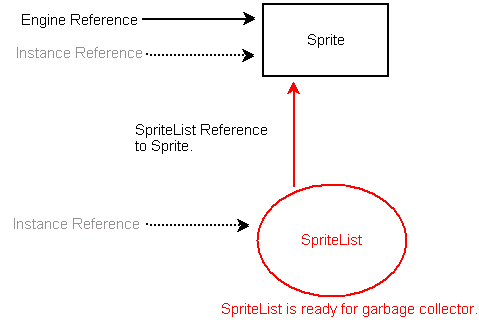 Converting Between Two-Way and One-Way

Similarly, all AttachableLists have a MakeOneWay method which makes the relationship with all contained IAttachables one-way.

Using a foreach statement on an AttachableList will allocate memory. This is a very common gotcha when working with AttachableLists (and PositionedObjectLists). Consider the following to improve the performance of your application: