Continuing the series of interface settings in Glue is the “Implements IVisible” property. You can probably guess what this means right away. If you’ve guessed that it gives your Entity a “Visible” property, then you’re right!

Just like the IWindow and IClickable properties, the great thing about the IVisible property is that it is reactive and recursive. What do we mean by that:

Setting IVisible is as simple as setting the other interface values:

At this point you will be able to simply set the Visible property on any instance of the given Entity you have set this to true on, and as always, with the help of auto-complete: 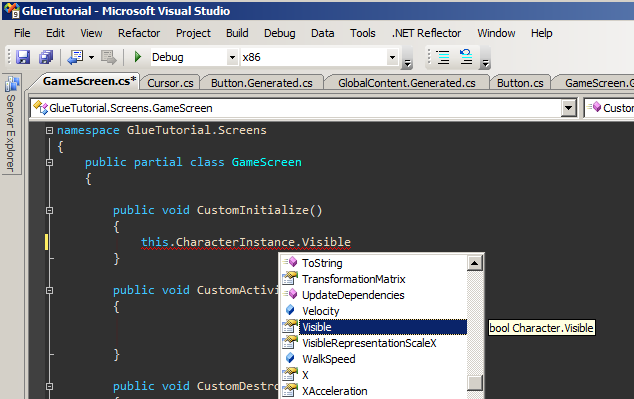 While the Visible property is very useful, you may not always want to use it. There are times when States are preferred. If you are not familiar with States, you will want to read through this tutorial on States first.

Let’s consider a situation where you have an Entity which we’ll call GameResults. GameResults is used to tell the user whether Player 1 or Player 2 has won. Instead of using Text objects, you are using Sprites for the “Player 1 Wins!” and “Player 2 Wins!” display. Therefore, GameResults has three Objects (all Sprites): 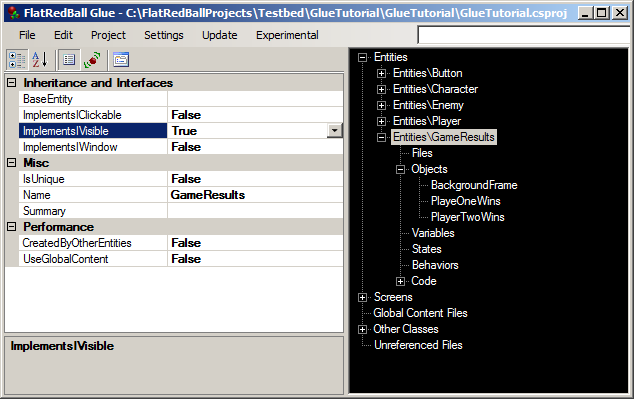 This can easily be solved using States. Since the GameResults needs to set some things to visible and some things to invisible, we’ll want to use States to control visibility. The first thing we need to do is create variables to control the Visibility of the Entity as a whole as well as the Visibility of the PlayerOneWins and PlayerTwoWins Sprites:

Now that the three variables have been created, we can create the three necessary states. First, we’ll just define the three empty states:

Finally, we can fill in the variables for the states. The AllInvisible one is the easiest:

This last section may be a little confusing, so let’s cover why we made the states the way we did. The first State (AllInvisible) was the easiest one. This one sets the Visible property on the Entity to false, which sets the Visibility of all contained elements to false.

The second state (PlayerOneVisible) sets the entire Entity’s Visible to true, which turns on all Sprites. We then want to turn off the visibility of the PlayerTwoSprite, so we do that by setting PlayerTwoWinsVisible to false. This turns off the PlayerTwoWins Sprite, but leaves the other Sprites untouched.

The PlayerTwoVisible state follows the same pattern as PlayerOneVisible – it turns everything on, then turns the PlayerOneWinsVisible variable to false.

The reason this method works is because States set variables in the order that they appear in Glue. If at some point in the future you come across a situation where you need to re-order variables, you can do so simply by right-clicking on a Variable and selecting the appropriate action to move it up or down 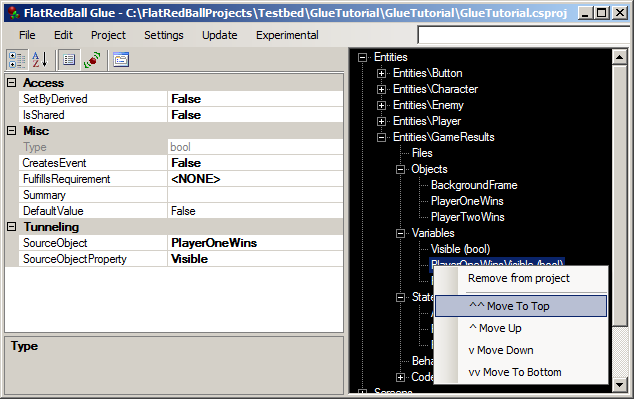 The generated code for the Visible property loops through all contained objects and setting their Visible property and setting a simple bool so the getter works as expected. This means that for an object to be set as visible/invisible, it must be done so in the generated code. You may be thinking “Great, since I add all of my objects through Glue anyway, then everything should work as expected.” That’s true, but what if you don’t add your objects to Glue?

Then all will work as expected. However if instead you

All of your newly-added Entities that you’ve added to your PositionedObjectList will be visible – even though the rest of your Entity is invisible. Let’s look at some code examples:

That wraps up the Implements IVisible property. In closing, as you create your Entities, keep in mind whether it’s acceptable for the entire Entity to be visible/invisible, or whether you should make States to handle flipping visibility.