This tutorial series will show you how to create a simple but complete pong clone.
In this part of the series you will learn to organize the game in Screens (create a menu screen, add a popup screen), add a pause mode to the game and make mouse based collision detection.

Since the game is nearly feature-complete after the second part of this tutorial series, you should attach more importance to how your code is organized. At the moment everything is placed in a single code file. Thatâ€™s fine for the beginning but will be a pain when your project grows.

Furthermore there should be a frame to the game. The game should start with a menu screen where you can start the game. After finishing the game, the menu screen should appear again.

To convert the game into a Screen you need to learn how to create Screens. You will learn that in the following tutorial chapter â€œCreate a templateâ€: Screen:How to use Screens

After downloading the template, create a new Screen named GameScreen and add it to your project.

Note: If you at a new screen for the first time, it may be added to your projects root directory. The template added a new directory called â€œScreensâ€ to your project. You should move your newly created file GameScreen.cs there also.

Note: If you had to move the file, the generated Namespace could be wrong. The Namespace should be

You may need to change it.

Converting the game to GameScreen

Be careful: If you add a new screen for the first time, it may be added to your projects root directory. The template added a new directory called â€œScreensâ€ to your project. You should move your newly created file GameScreen.cs there also.

Your games Initialization() method should be very short by now:

Now move all the update logic from the games Update() method to the GameScreens Activity() method.

Your games Update() method should also be very short:

Since the method performing all the update tasks is called Activity() in the Screen class, the call to base.Update(gameTime) in the game over handling must be changed to base.Activity(firstTimeCalled).

Also copy all the created private methods over to the screen class:

Note: If your code does not compile you may have to add some using statements at the top of your code. By pressing <Shift> + <Alt> + <F10> when your cursor is on the unknown type you can let Visual Studio do thos work for you.

Now our game screen is complete. We just need to add it to the ScreenManager.

Add the following code to the games Initialize() method:

You also have to clean up your objects since you use the Screen. But this is managed by the Screen class.

Just add all your Sprites and Texts to a specific list:

You should place these statements into the Initialize() method of the GameScreen to the according blocks in the code. The objects in these lists will be destroyed when the Screen is destroyed.

Compile and run the code. When everything was moved correctly the game should work in the same way as before. But your code is more organized now. 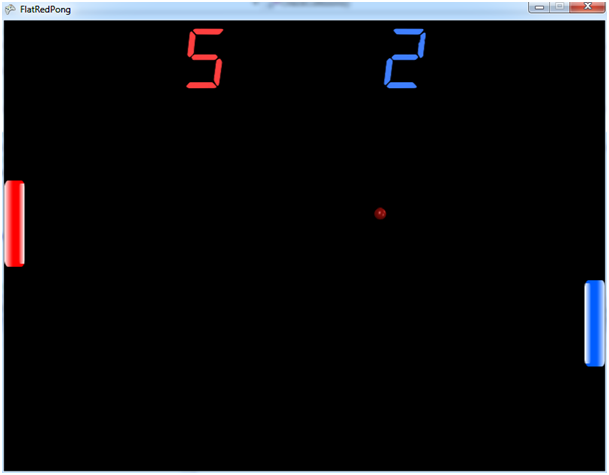 Create another Screen named MenuScreen and add it to your project.

You will need a background and a button graphics. Again you can create your own graphics or you take these: 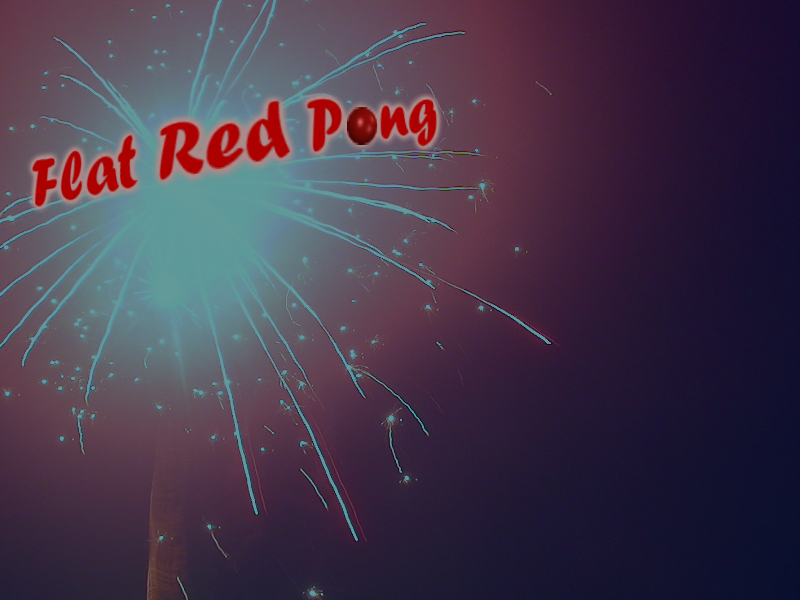 In the menu Screen there will be two buttons:

There will also be a tip text for each button which explains what it does.

Now initialize these variables in the Initialize() method:

Nothing really new here. The sprites and text are initialized, the position, collision and color are set and the objects are added to mSprites and mTexts list for automatic removal.

A better way to do this task is to create a class MyScreen (derived from Screen) and implement the method there. All special Screens (like GameScreen) will derive from MyScreen.

Another way of centralize a method like this is to create a static helper class.

Since the new screen should be seen on startup, you have to add it to the ScreenManager in the games Initialize() method:

Compile and run the code. You will see the new menu screen on startup. 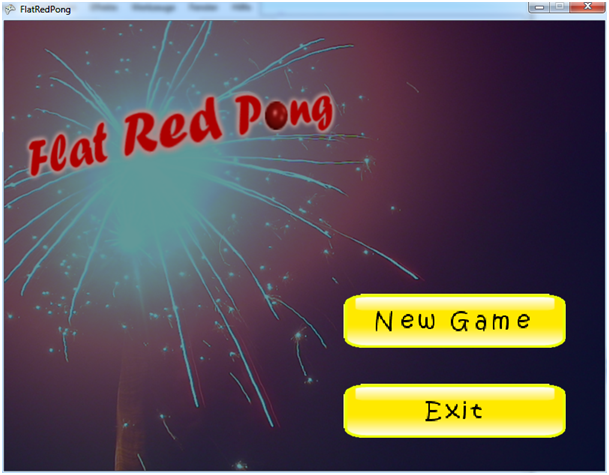 Now some logic is needed in the screen. First the game should be started again.
Add the following code to the Activity() method:

As you can see, the update handling will be put in an own method again.

Lets take a look at the code. First all variables that will be set later are reset. Then it will be checked if the mouse â€œis onâ€ the exit buttons collision rectangle. If it is, the text color of the â€œExit Gameâ€ text is set to red. Furthermore a display text for the tip text is set.

Since the mouse is on the exit button it is checked if the left mouse button is pressed. If it is, the method ExitGame() is called which should return to the menu screen.

The same handling is performed for the â€œNew Gameâ€ button, but another tip text is set and the method StartGame() is called which should move to the game screen.

Add the both methods called above at the end of the MenuScreen class:

Compile and run the code. When you hover the mouse over the buttons you will see the text color of the button will turn red. Furthermore will there be a tip text next to the buttons. 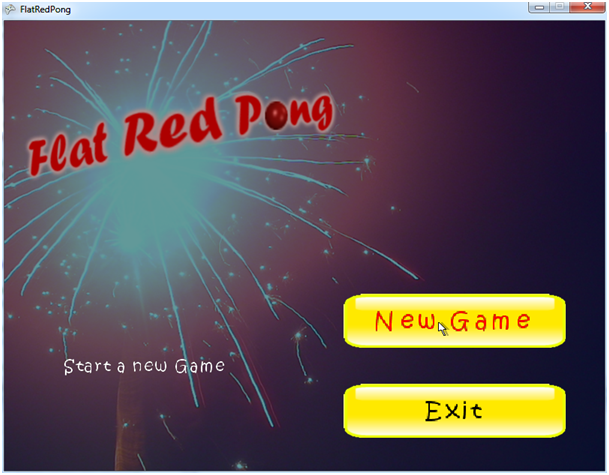 The last action of this part of the tutorial is to add another Screen to the game. This screen handles a paused game.
Pressing the keys â€œPâ€ or â€œEscapeâ€ will pause the game.

You will need a background graphics. Again you can create your own graphics or take the one below: 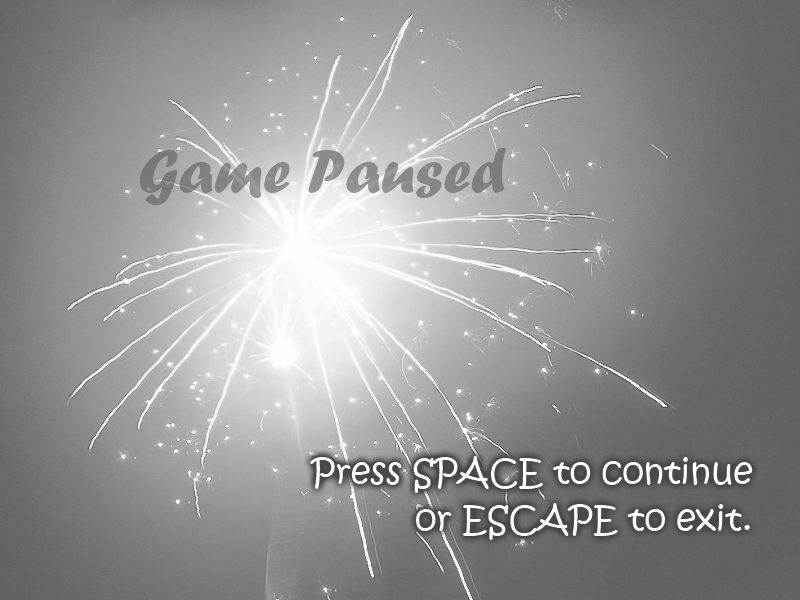 I added the complete text of the screen to the image. So there are not many objects around in the screen.

Note: The Image has a semi transparent gradient from the center to all borders. This will have the effect that you can still see the paddles, ball and score when game pauses.

The initialisation is accordingly simple:

Note: If you copied the code for MenuScreen and PauseScreen, then you will set the property

To have them work properly, you have to add some more lines of code:
Game.Initialize():

This will disable the FRBs own mouse cursor.

This will hide the mouse cursor in the game.

Since the PauseScreen will be used as a â€œPopupScreenâ€, you need to clean it up on your own:

Now the PauseScreen can be called if the defined keys are pressed during the game.

Add the following code at the end of the Activity(â€¦) method of the GameScreen:

The collision checks and the input handling is only done, if not in pause mode. You have to add the variable â€œpauseâ€ on class scope (itâ€™s a bool type).

Before the pause flag is checked, the method HandlePauseMode() is called.
The method looks like this:

There are two parts in this method:

How you can see, the whole pause logic is in the game, including the PauseScreen logic.

To pause the game the ball is stopped. To continue the game, the balls velocity will be reset.
Letâ€™s take a look at the two methods:

To pause the game, the balls velocity is stored in a new class variable. Then the velocity of the ball is set to 0 and the pause flag is set to true.

To continue the game, the balls velocity reset from the class variable. Then the pause flag is set to false. The initialization of the save variable is not necessary, but good style.

You need to define the variable ballVelocity of type Vector3 at class scope.

Compile and run the code. Now we have a comfortable, pausable pong game! 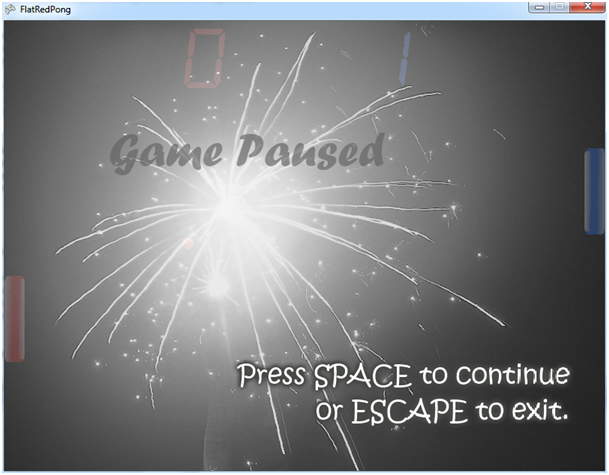