Screens and Entities are two common concepts in Glue. A Screen represents a container for game content and other Entities. Screens define the flow of your game. Often game developers will create many screens up-front to help them think through a game’s structure.

As you work with Screens you will find that they are very similar to Entities. To create a Screen:

You should now have a Screen in game called GameScreen.

Adding an Entity Instance to GameScreen

Once you have at least one Screen in your game (GameScreen), you can add Entity instances to that Screen. Entities can be added through Glue or through game code. Glue provides a number of ways to add an entity: 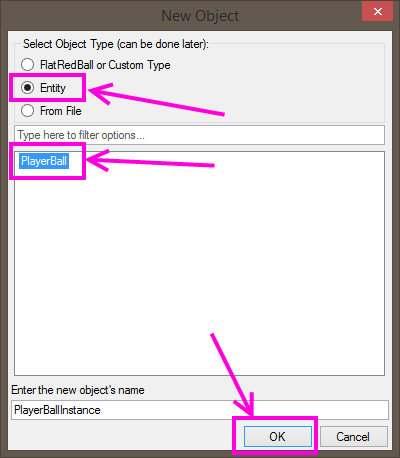 To recap we now have an Entity called PlayerBall which has a Circle. We’ve also created a GameScreen which contains an instance of our PlayerBall. If we run our game, it will show a white circle (our PlayerBall instance). We’re now ready to start adding some code to our project. The next tutorial will cover controlling your Entity’s movement.