So far we have a basic structure for our game: an Entity with graphical representation, a Screen, and an instance of our Entity in our Screen. This tutorial requires writing code.

How will we control our Entity?

Before implementing code to control your Entity you will need to decide how to control an Entity. For this tutorial we will implement controls using Xbox 360 controllers as well as keyboard (in case Xbox 360 controllers are not available). We will use FlatRedBall’s input interfaces so that our game code doesn’t need to consider which input device is using after initial setup.

First we’ll need to define which controls are needed in our game. Our PlayerBall will require the following input:

We’ll want to write the PlayerBall so that it will work with any input device, whether that’s Xbox 360 controller, Keyboard, or any other device. To add code to PlayerBall, double click PlayerBall.cs in Visual Studio. This will be located in your project’s Entities folder. 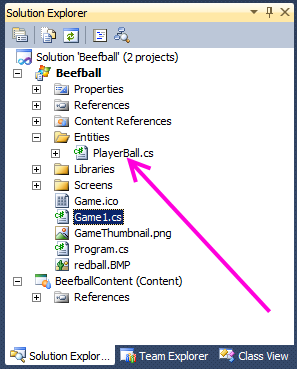 Modify the PlayerBall.cs file so it contains two input properties as follows:

Next we will add code to move the player ball.

Notice that there are four methods in PlayerBall.cs:

CustomActivity  gets called every frame, so we can use it method to respond to controller input and modify our PlayerBall appropriately.

Add the following code in the CustomActivity  method in PlayerBall.cs:

At this point we have written fully-functional code for moving the ball according to its MovementInput ; however, we haven’t assigned the MovementInput  yet. We’ll do this next.

The MovementInput  and BoostInput  were intentionally created as public properties so that they could be assigned by the GameScreen. The GameScreen will contain logic for deciding which input device to use.

To assign the input interfaces, open GameScreen.cs in the Screens folder and modify the CustomInitialize method as follows:

Cleaning up the code

Clean code is very important. This is something we stress at FlatRedBall for all developers making any kind of game regardless of size. Therefore, this tutorial (and others in the future) will discuss how code can be improved to be cleaner and more flexible.

The code we wrote above has a number of problems:

Glue provides a number of ways to separate data from logic. The simplest of these is to create variables. To add a variable to the PlayerBall entity:

Finally, return to the movement code inside PlayerBall.cs and change the code to:

If we run the game now we can control the player with the W, A, S, and D keys:

The benefit of using the input interfaces ( I2DInput  and IPressableInput ) is that the input device being used can be set or changed without any code changes in the entity. For example, we can modify the GameScreen to optionally use an Xbox controller (either Xbox 360 or Xbox One) if connected, otherwise it will fall back to the keyboard. To add support for keyboard and Xbox controls, open GameScreen.cs and Modify CustomActivity as follows:

If your project is targeting the UWP platform then the IsConnected property may return false even if your controller is connected. This is caused by a bug in MonoGame 3.6, which has been logged here: https://github.com/MonoGame/MonoGame/issues/6012

Until this has been fixed, this check can be moved to CustomActivity. If moving this code to CustomActivity, be sure to add a check to only run this one time, or to only assign the input if the connected state has changed.

Finally, we will clean up CustomActivity. In general, we encourage keeping the Custom methods free of logic so that it is clear what an Entity/Screen is doing when initialized and when destroyed without having to mentally translate code into concept. Open PlayerBall.cs and replace the CustomActivity with the following:

Similarly, we’ll want to clean up the CustomInitialize method in GameScreen.cs:

Now we have a PlayerBall Entity which is cleanly written, has speed which can be customized through Glue, and can be moved with the game pad or keyboard. The next tutorial will cover defining collision in the GameScreen.