At this point Beefball is a fully-playable game, but we’ll be adding one final feature: dashing. This provides deeper gameplay that rewards skill and adds an element of anticipation and excitement.

A dash will give the player a burst of speed in the current direction that the player is pointing. The dash can be used to hit other players, shoot the puck, or dive in front of the puck to block a goal. To add a dash, modify CustomActivity in PlayerBall.cs as follows:

If you try to build your game, you’ll notice that the variable DashSpeed is undefined. This is a variable that should be defined in Glue so that it can be tuned easily:

Your game should build and dashing should be fully functional.

Currently the player can dash indefinitely. We’ll modify the dash so it has a cool-down after it’s used. We’ll need a variable to keep track of when the dash was first used, and compare against that variable to check if the user can dash again.

First, add the following variables to your PlayerBall.cs at class scope (make it a field):

Next, add a check for the last dash time and a set to lastDashTime in DashActivity in PlayerBall.cs. Your entire method should look like:

Just like before, we need to create a DashSpeed variable in Glue: 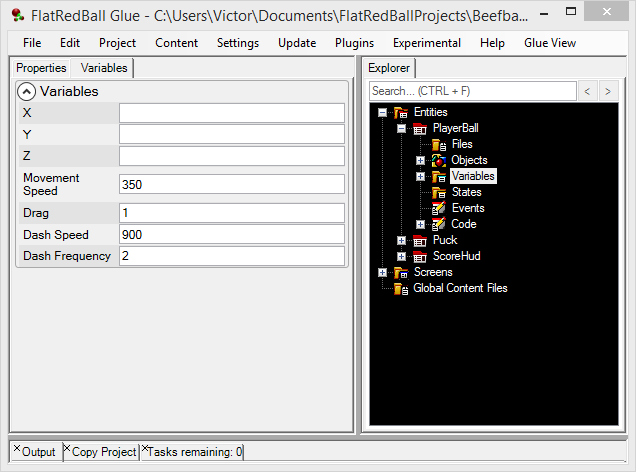 Now the player will only be able to dash once every two seconds.

Why did we create DashFrequency and DashSpeed variables in Glue, but lastTimeDashed in Visual Studio? You may have noticed that we defined some of our variables (like DashFrequency and DashSpeed) in Glue, but we defined lastTimeDashed in Visual Studio. When working in Glue it is important to distinguish between “data” and “logic”.

Variables considered data are created in Glue so that they can be easily modified. Game development is an iterative process, and even the most experienced game designers will make changes to their game throughout development. Creating variables in Glue makes changing variables easy, and communicates to other developers that these variables should be tuned.

The lastTimeDashed variable, on the other hand, exists solely to support the logic of limiting dashing. The actual value of lastTimeDashed will change many times as the game executes, and setting it through Glue will either have no impact on the game or introduce an unintended bug of making dash not work (if the value is set to a large positive value).

Now that the player’s dashing is limited, we need to add some visible indication of when another dash can occur. We’ll do this by adding a second Circle to the PlayerBall which will grow when the user has dashed, then disappear when the user can dash again. To do this: 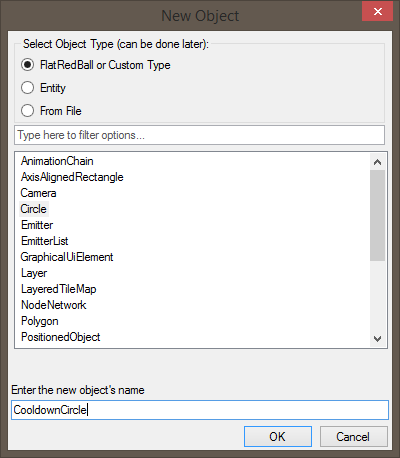 To add the two states:

States can modify any variable that exists in the given Screen or Entity. If you select either of the new States, you will see that the variables that are listed above under “Variables” also appear here. You can make a state modify a variable simply by entering the value in, or you can revert back to default by right-clicking on a variable and selecting “Set to Default”.

As mentioned above, we’ll want the CooldownCircle ball to grow (increase its Radius) to give the player an indication of how much time is left in the cooldown. To do this, we’ll need to tunnel in to the CooldownCircle’s Radius property:

Next let’s define the two states:

Now that our states are defined, let’s use them in code. The simplest way to use states is to assign an entity’s current state variable. Glue also provides functions for interpolating between states, which is the process of gradually changing from one state to another. We will write code to set the state to “Tired”, then interpolate to rested over the course of two seconds – of course we’ll use DashFrequency rather than hard-coding the value 2.

To use these newly-created states, go to PlayerBall.cs and modify the DashActivity function as follows:

To use the states, add the following two lines of code inside the if-statement in DashActivity in PlayerBall.cs: 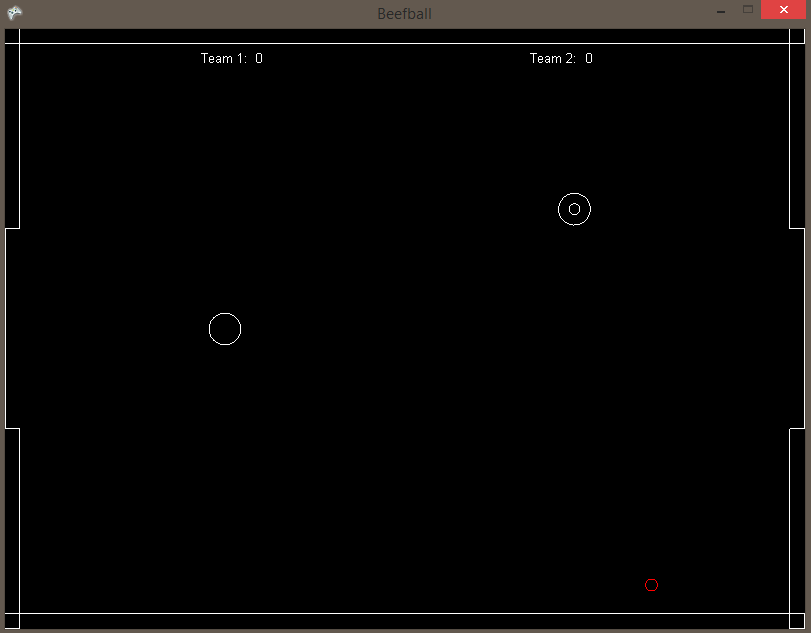 Lets change the color of the PlayerBall to help tell the two players apart. We will “tunnel” to the Body’s Color so that it can be changed per player instance.

Now that the color variables existis exposed, lets change one circle in GameScreen 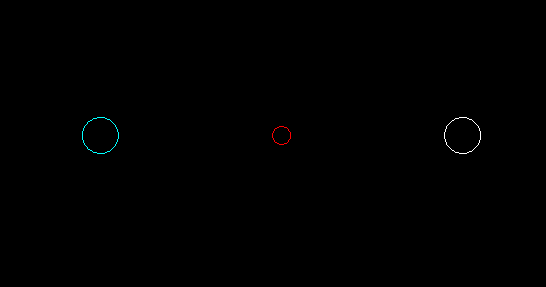 You can now tell the difference between each player.

You just made a game!

If you’ve read this far, then you have officially just finished your first FlatRedBall game. Way to go! At this point, you can continue reading other tutorials, tweak this game more, or start on your own brand new game. Good luck!