Clipping is the process of removing part of a Sprite from being rendered by defining a rectangular area which will contain the Sprite. This tutorial will show you how to write code to clip Sprites within a rectangle. This form of clipping has some requirements:

This code will show you how to clip a Sprite given a static position. Moving a Sprite within the clip region and having it clip automatically is slightly more complicated; however, that process can be derived from this simpler process.

This tutorial will use Glue; however, the majority of what is is discussed here is code, so this tutorial can be followed along in pure code.

For this setup I will use an empty XNA 4 PC project called ClippingTutorial. See this page for information on how to create a new tutorial.

Now that we have a Screen, we can add an AxisAlignedRectangle:

Next we’ll add a Sprite to our Screen. This Sprite will be clipped as it moves around the screen:

By default the Sprite will be positioned in the center of the screen, where it will not be clipped. You will need to modify the starting position of the Sprite to see it get clipped. This can be done in the Screen’s CustomInitialize:

First, we’ll add some basic logic that controls whether the entire Sprite is visible or not. To do this, add the following code in your Screen’s CustomInitialize after modifying your Sprite’s position:

At this point the Sprite will disappear when it is fully outside of the ClipRegion AxisAlignedRectangle.

Next we’ll write the actual meat of clipping. The code needs to do the following:

Keep in mind that this code assumes that Sprites use a positive TextureScale value, as opposed to explicit Width and Height values. 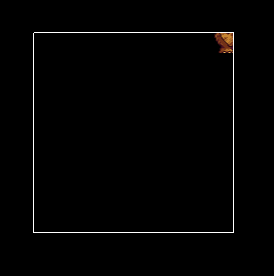 We can take the above code to make a more portable function. The following code takes the above logic and modifies the variable names so it is a reusable function: