Content managers provide functionality for organizing and caching game assets. They can be thought of as a “bucket of assets”. When you create an asset through the Content Manager, you give it a name (usually its file name) and decide which Content Manager it goes into. Later if the same name appears, the FlatRedBall Engine will return a reference to that asset instead of loading it from disk.

Although MonoGame has a content manager class by the qualified name of Microsoft.Xna.Framework.Content.ContentManager, you do not have to ever explicitly interact with this class when using FlatRedBall. Instead, you simply work with content managers through the FlatRedBallServices class.

Computer memory can exist in a variety of locations: On the hard disk, in RAM, or even on the hard disks of other computers which you can access through the Internet (as you are currently doing when viewing this page). Not all types of memory can be accessed with the same speeds. Getting data through the Internet is very slow compared to data that is sitting on your local hard disk, and accessing data on the hard disk is much slower than accessing data in RAM. When the same data needs to be accessed multiple times, making a copy of it and moving it to faster memory can help improve performance.

Content such as Textures and Models are copied from the hard disk to RAM to speed up future access to this memory – as well as to prevent duplicate memory in RAM.

Content managers are also useful for organizing data. Any data which has the same lifespan – such as textures, geometry, and sound files in a given level – should belong to the same content manager. When the level ends, simply removing that content manager unloads all memory associated with the level. Content managers make memory management and game state changes much easier.

This method has an overload which allows the content manager to be specified. Calling the one-argument version is the same as passing “Global” as the second argument:

To specify a different content manager, simply provide the string of the new name – there is no need to instantiate any instances as this is all handled internally.

Loading the same asset using the same content manager does not result in multiple copies of the asset in memory and the hard disk is only accessed once. The following code creates only one copy of the redball.bmp texture in memory.

While the following creates three separate copies of the redball.bmp texture and also the hard disk is accessed three times:

Or another way to look at it is:

The following code simulates the creation and destruction of 3 levels. Levels can be loaded and unloaded by pressing the 1, 2, and 3 keys. The text object which is created displays the loaded content and the Sprites themselves display the loaded Sprites. 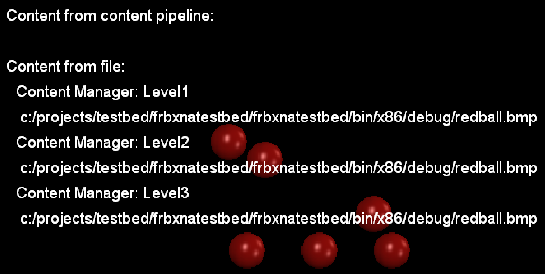 Even if you understand the concept that content managers can be thought of as a “bucket of asset”, you may be wondering which content manager to put assets in. The following lists a few conditions to help you decide.